The English cap­i­tal may not have the most Mediterranean of cli­mates, but when it comes to pro­vid­ing qual­ity olive oil to its denizens, London really knows what it’s doing. Here, we dis­cover the best places in the cap­i­tal to pur­chase excep­tional oils.

South London’s Borough Market is a peren­nial Mecca for the city’s food­ies. The stalls here groan under the weight of arti­san cheeses, cakes, organic veg­eta­bles and hand-reared meat. Borough Market is also home to The Olive Oil Co.

Founder Danilo Manco hails from Puglia, which is where many of the com­pa­ny’s oils are sourced. Particularly rec­om­mended is the sin­gle estate Cinque Foglie extra vir­gin, made using olives picked just before they become fully ripe. The Olive Oil Co. boasts a superb range in vine­gar too; buy a hunk of fresh Borough Market bread, and get dunk­ing on the spot. 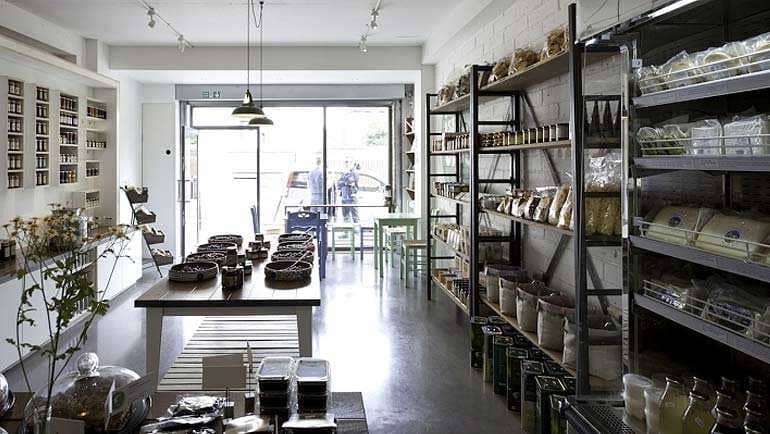 The Isle of Olive selects its oils from Greece; Kalamata, Sparta, Corinth, Crete, Mitilini, Fthiotida and Chalkidiki. The shop prof­fers an excel­lent selec­tion of oils includ­ing All Organic Greek Garden Extra Virgin, and a range of Kalamata PDOs.

The shop sells juicy Kalamata, Amfissa, Chalkidiki and Thassos olives, tape­nade and olive oil soap. As well as the Isle of Olive store, located just off East London’s Broadway Market, there is a chance to catch the team every Sunday at the Chapel Market in Angel. Olive oil turns up in the odd­est place around London. None more so than Embassy Electrical Supplies in the heart of the city. As the name sug­gests, the main com­mod­ity of this inde­pen­dent shop is cables, switches and light­bulbs. But it also per­forms a roar­ing trade in Cypriot and Turkish olive oil.

The shop’s owner, Mehmet Murat, has been in the UK since the 1950s and owns olive groves in the vil­lage of Louroujina in his native Cyprus, and a forty-five-acre farm in Turkey. The oil, shipped over in small­ish batches, is superla­tive in qual­ity; New York Magazine once voted it the most deli­cious in the world. And the fam­ily-run shop is tough to beat for warm ser­vice, too.

London has some of the world’s most deca­dent depart­ment stores. In their food halls is an admirable sup­ply of superla­tive olive oils. Fortnum & Mason in Piccadilly has over 15 dif­fer­ent vari­eties, includ­ing Castillo Early Royal 2012 Harvest and Castillo Picual First Press 2012 Harvest, which is rec­og­nized for its almond, green apple and banana skin fla­vors.

Olive to Oil and Melbury & Appleton

Though Olive to Oil is an inter­net bou­tique, it’s the brain­child of Londoners, and reg­is­tered in London. Olive to Oil is vying to be one of the pre­mier high-end olive oil deal­ers; bot­tles for sale include a white truf­fle olive oil by Manni, and a gold-infused num­ber from Blanc Luxury Gastronomy.

Melbury & Appleton cus­tomers, mean­while, are invited to pur­chase their oil online before col­lect­ing it from the ware­house, based inside an old Victorian pie fac­tory in Islington.

Extra virgin olive oil is a flavorful and healthy alternative to other types of cooking fats. Discover The best olive oils for cooking below.