The Alert and Phytosanitary Information Network of Andalusia (RAIF) has clas­si­fied olive moth infes­ta­tion lev­els in the region as ​“very low,” with an inci­dence of approx­i­mately half that seen in April 2021, although the organ­ism has been detected in all eight provinces.

Data from the Andalusian regional gov­ern­ment show that olive trees in the west­ern provinces are in a more advanced phe­no­log­i­cal growth stage, with iso­lated instances of flow­er­ing (BBCH-scale stages 60 to 61) already observed in Huelva, Cádiz, Seville and Córdoba; and petal fall (BBCH-scale stage 67) observed in cer­tain early-flow­er­ing vari­etals in Seville and Cádiz.

In Andalusia as a whole, how­ever, most trees have been recorded as being between BBCH-scale stages 52 to 59, with flower clus­ters still devel­op­ing. Because of the rela­tion­ship between the olive moth life cycle and the phe­no­log­i­cal devel­op­ment of its host, the inci­dence of anthophagous (flower-eat­ing) gen­er­a­tion moths is cor­re­spond­ingly low.

As of April 27, no such activ­ity had been observed in either Granada or Jaén, 0.7 per­cent infes­ta­tion was recorded in Seville and Córdoba; and 0.2 per­cent in Málaga. These lev­els are exactly half of those recorded in the final week of April 2021. The only excep­tion to this low inci­dence is the province of Cádiz, which recorded an aver­age of 4.2 per­cent.

Despite most trees in Andalusia still being in the pre-flow­er­ing stages, how­ever, the aver­age inci­dence of phyl­lophagous (leaf-eat­ing) gen­er­a­tion olive moths is also very low, rang­ing from just 0.1 per­cent recorded in Cadiz, to a max­i­mum of 1.2 per­cent in Málaga and Granada.

In an offi­cial state­ment, the agency con­cluded that the pest ​“is begin­ning its activ­ity, with very low and incip­i­ent dam­age in the most phe­no­log­i­cally advanced plots in almost all provinces, except for Granada and Jaén, where its activ­ity is still null. We could say that we are in a period of tran­si­tion between the phyl­lophagous and anthophagous gen­er­a­tion.”

As a means of bio­log­i­cal olive moth con­trol, RAIF rec­om­mends the release of lacewing lar­vae into groves at BBCH-scale stages 50 to 59. 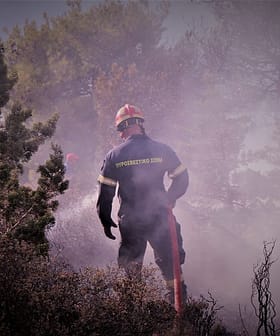 Local olive farmers are angry after 65 percent of applications for recovery aid were rejected. They argue the authorities are underestimating long-term damage.

One olive farmer on the Croatian coastal island is revitalizing olive trees by building an environment to protect and nurture them.