New Insights Into the World’s Oldest Bottle of Olive Oil

After a series of studies, researchers were able to confirm the content of a bottle found at an archaeological site near Mount Vesuvius was indeed olive oil. The discovery sheds light on the oil's molecular evolution over time.
By Ylenia Granitto

New research has con­firmed that a 2,000-year-old bot­tle found in the ancient Roman town of Herculaneum, near mod­ern-day Naples, is olive oil and has shed light on the mol­e­c­u­lar trans­for­ma­tion of the oil over the past two mil­len­nia.

“We are very sat­is­fied with the insights obtained [from the stud­ies],” said Raffaele Sacchi, the chair of the food sci­ence and tech­nol­ogy unit of the University of Naples Federico II depart­ment of agri­science (DIA).

Working with col­leagues at the National Research Council and the University of Campania Luigi Vanvitelli, Sacchi came to this con­clu­sion after car­ry­ing out mag­netic res­o­nance and mass spec­tropho­tom­e­try test­ing on the bot­tle, as well as radio­car­bon dat­ing the organic residue.

“We have been able to unequiv­o­cally con­firm that what we have in our hand is the most ancient olive oil residue recov­ered, and cur­rently exposed, in a sig­nif­i­cant amount, as it dates back to 79 A.D.,” Sacchi said. ​“Moreover, our study strik­ingly high­lights the mol­e­c­u­lar evo­lu­tion of olive oil through an almost 2,000-year-long stor­age period.”

Due to both the high tem­per­a­tures caused by the erup­tion of Mount Vesuvius in 79 A.D. and an almost two-mil­len­nia stor­age period in uncon­trolled con­di­tions, the remains of the oil still bear the traces of the chem­i­cal mod­i­fi­ca­tions typ­i­cal of altered dietary fats.

“In fact, very lit­tle of the mol­e­cules com­monly found in olive oil sur­vived,” Sacchi said. ​“The triglyc­erides, which rep­re­sent 98 per­cent of the oil, broke down into the con­stituent fatty acids; the unsat­u­rated fatty acids are com­pletely oxi­dized, gen­er­at­ing hydroxy acids, which, in turn, with a slow kinet­ics, reacted with each other form­ing con­den­sa­tion prod­ucts, estolides, which have never been observed before in con­ven­tional processes of nat­ural alter­ation of olive oil.”

Furthermore, the olive oil residue pro­duced a num­ber of dif­fer­ent volatile sub­stances, which are the same as those found in highly ran­cid oil and formed as the result of the decom­po­si­tion of oleic and linoleic acids.

The sat­u­rated fatty acids and phy­tos­terols pro­files also made it pos­si­ble to estab­lish with cer­tainty that the residue found in the bot­tle does not con­tain ani­mal fat, which was widely used by the pop­u­la­tion of the time, and that it is unequiv­o­cally olive oil.

“The iden­ti­fi­ca­tion of the nature of this archae­o­log­i­cal bot­tle of olive oil gives us irrefutable proof of the impor­tance this prod­uct had in the daily diet of the pop­u­la­tions of the Mediterranean basin, in par­tic­u­lar to the ancient Romans in Campania Felix,” he said.

“Also, this has a major impact on cul­ture and on the image of Italian olive oil, since we obtained a ​‘cer­ti­fied’ glass bot­tle of olive oil stored for as many as 2,000 years,” Sacchi added, clar­i­fy­ing that the oil most likely had solid­i­fied because the bot­tle laid in an inclined posi­tion. 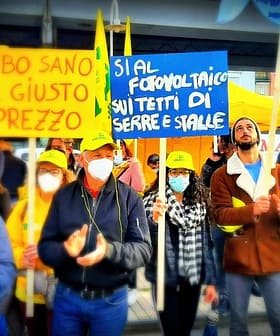 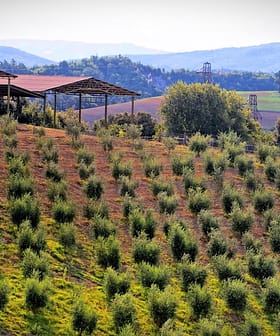 One Year After a Devastating Fire in Montenegro, Farmers Continue to Rebuild

While a court ruled that olive growers were entitled to some compensation, the emotional and cultural pains endure.