According to a report by the Office of Economic and Commercial Affairs of the Greek Embassy in New York, Greece was the sec­ond-largest exporter of table olives to the United States in the first half of 2022, behind Spain.

Spanish exports of table olives to the U.S. exceeded 63,000 tons in the first six months of the year, while approx­i­mately 57,000 tons of olives were imported from Greece dur­ing the same period. Table olive exports from Morocco and Italy reached 19,000 and 11,000 tons, respec­tively.

At a global level, exports of Greek table olives are expected to increase by around 20 per­cent in value this year com­pared to the 2021/22 crop year.

“If we can sus­tain our pace, we will have a record year of exports [of table olives] of more than €600 mil­lion,” said Nelos Georgoudis, the for­mer head of the Panhellenic Association of Manufacturers, Packers, and Exporters of Table Olives (Pemete).

However, the asso­ci­a­tion noted that the pre­vi­ous crop year has been unre­ward­ing for Greek table olive pro­duc­ers.

“[The pre­vi­ous sea­son] was one of the most dif­fi­cult in recent years, not only due to the reduced pro­duc­tion [of table olives] in 2021/22 but also due to the neg­a­tive inter­na­tional eco­nomic envi­ron­ment,” Pemete said in a press release.

A total of 165,000 tons of table olives were pro­duced in Greece last year, accord­ing to data from the European Commission, 24 per­cent below the country’s rolling five-year aver­age.

Despite the absence of rain and short­ages of work­ers in some pro­duc­ing areas, the sec­tor is expected to rebound with an esti­mated pro­duc­tion of more than 200,000 tons in the 2022/23 crop year. 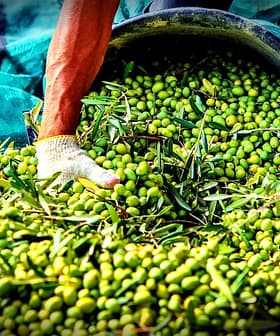 Olive oil production decreased by nearly eight percent in 2020/21 along with consumption. Both are expected to rebound during the current crop year.