Farmers and producers in Italy’s fifth-largest producing region hope the PGI will add value to their olive oils and mitigate rising production costs.

Citing a pro­duc­tion tra­di­tion that dates back more than 2,000 years and its unique ter­roir, pro­duc­ers in the cen­tral Italian region of Abruzzo have asked to have their extra vir­gin olive oil rec­og­nized with a Protected Geographical Indication (PGI) by the European Union.

The PGI olive oil could be the cor­ner­stone of a sys­tem that adds value to the region.- Nicola Sichetti, pres­i­dent, CIA Abruzzo

To this end, the Italian Agricultural Confederation’s Abruzzo (CIA Abruzzo) branch has launched the Abruzzo PGI pro­mo­tion com­mit­tee. Its goal is to com­pile the doc­u­men­ta­tion, which will then be sent to the Ministry of Agricultural, Food and Forestry Policy.

“The PGI olive oil could be the cor­ner­stone of a sys­tem that adds value to the region,” said Nicola Sichetti, pres­i­dent of CIA Abruzzo.

He added that Abruzzo is Italy’s fifth-largest olive oil-pro­duc­ing region, with annual yields of about 27,500 tons. About 60,000 farm­ers, agri­cul­tural busi­nesses, and 530 millers are involved in olive oil pro­duc­tion.

Some of Abruzzo’s olive groves are cen­turies old, and the tra­di­tion of olive grow­ing dates back to the fifth cen­tury BCE. Under Roman rule, olive cul­ti­va­tion flour­ished and is cited by promi­nent authors, includ­ing Virgil and Ovid. In addi­tion, olive oil pro­duc­tion and trade were a source of wealth for many in Rome.

After a period of stag­na­tion dur­ing the Middle Ages, olive grow­ing in Abruzzo under­went a period of restora­tion at the begin­ning of the 19th cen­tury after sev­eral farm­land reforms, which also paved the way for the cul­ti­va­tion of vines.

During this time, olive oil became a sta­ple of local house­holds and was widely used dur­ing reli­gious cer­e­monies.

While the new PGI pro­posal is meant to iden­tify and pro­tect tra­di­tional extra vir­gin olive oil pro­duc­tion in the region, there are already three with Protected Designation of Origin (PDO) sta­tus. Overall, there are 49 PDO olive oils in Italy.

“The whole pro­duc­tion chain can ben­e­fit from the inno­va­tion and the val­oriza­tion of this prod­uct,” Sichetti said. ​“We already have those three PDOs, but they are not enough to sup­port Abruzzo extra vir­gin olive oil, a prod­uct we hope to make rec­og­niz­able at regional, national and European lev­els.”

He added that the pro­posed PGI would add needed value to local olive grow­ers, who have seen pro­duc­tion costs rise faster than prices. ​“Many risk not even being able to cover the pro­duc­tion costs,” he added.

According to Emanuele Imprudente, the agri­cul­tural sec­re­tary of the Abruzzo regional gov­ern­ment, the ini­tia­tive is an excel­lent first step.

“We need it to be able to sell and pro­mote a PGI olive oil which will be a source of pride for the whole region,” he added. ​“Specific pub­lic sup­port aimed at the millers will also accom­pany the PGI pro­posal.”

Luigi Di Giandomenico, pres­i­dent of Innovaolio, a local pro­duc­tion chain project, said every­one in the region needs to work together for the PGI ini­tia­tive to suc­ceed.

“We are going through chal­leng­ing times,” he con­cluded. ​“We have the duty to react together and be united in this propo­si­tion.” 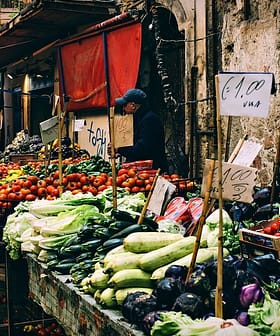 Olive growers hope that the warm winter does not lead to an early spring bloom followed by a late freeze, as happened in 2021.

The announcement came after a study determined organic agriculture can cut production costs for farmers.

Using thermal sensing and the powerful noses of dogs, authorities in Puglia ramp up efforts to detect the latest outbreaks of Xylella fastidiosa before symptoms occur.