As Citrus Struggles, Some Olive Growers Take Root in Florida

Olives are not new to the Sunshine State, but their economic viability is coming into the spotlight as citrus struggles.

On a small, 35-acre island in Groveland, Florida, Keith Keogh plans to grow olives where cit­rus trees once dom­i­nated the land­scape.

We can’t sup­port a state full fo asphalt and con­crete, we need to pre­serve some of these beau­ti­ful sugar sand hills that are out here.- Keith Keogh, Olave

“We’ll start by grow­ing table olives at first,” Keogh, a for­mer cor­po­rate chef at Disney and Red Lobster, told Olive Oil Times. ​“Then you’ll have ones that aren’t of the qual­ity and appear­ance of table olives that will go to olive oil and we’ll do a sin­gles press on those olives.”

Depending on the qual­ity of those olives, the olive oil will then either be put into jars or go towards use in cos­met­ics. ​“We don’t want to put our stamp on any­thing that isn’t of very high qual­ity,” Keogh said.

Growing olives in Florida is not new. The Spanish first intro­duced olive trees to the state in the 1700s and, accord­ing to the Florida Farm Bureau, there are now more than 400 acres of olive trees in the Sunshine State, rang­ing from com­mer­cial grow­ers with more than 20 acres to back­yard hob­by­ists.

Keogh’s endeavor serves as a model to find out how olive trees might play out in Florida’s agri­cul­tural future. Before he can plant his olive trees on Hunt Island, Keogh is clear­ing out the old and dying cit­rus trees, many of which have been rav­aged by a dis­ease known as cit­rus green­ing.

Citrus green­ing is an insect-borne dis­ease that has been dis­rupt­ing the indus­try in Florida since it emerged in the mid-2000s.

According to the United States Department of Agriculture, cit­rus pro­duc­tion has declined by more than 75 per­cent in Florida over the past two decades; a stark decrease for the state that is almost syn­ony­mous with orange juice.

“There’s a need to have another crop,” Keogh said. ​“When you really look at North Africa and other parts of the Mediterranean where olives are grown, it is a sandy and high lyme type of soil and the island’s soil kind of reminds me of that.”

Keogh is not alone in believ­ing that olives have the poten­tial to grow well in Florida. Several researchers within the University of Florida sys­tem have spent the last half-decade look­ing into this ques­tion and exper­i­ment­ing as well.

“Thus far, olives have been rel­a­tively pest free, and appear to be a sus­tain­able crop for this region,” Peter Andersen, from the University of Florida, North Florida Research and Education Center, said.

“Olives may be estab­lished in many areas of Florida in well-drained soils,” the report said.

On his sandy-soiled island, Keogh plans on grow­ing mostly Arbequina olives. He will also exper­i­ment with Manzanilla and Mission but in much smaller quan­ti­ties.

Florida is not the ideal cli­mate for grow­ing olives. The tem­per­a­ture rarely gets cold enough for long enough to allow the trees to become dor­mant, which then allows them to pro­duce fruit. However, Keogh said for prob­lems such this one, olive grow­ers will have to be inno­v­a­tive.

“It’s a mat­ter of just fig­ur­ing out what it takes to get the best qual­ity,” he said. ​“They will not be a copy or imi­ta­tion of what’s already there because this is a dif­fer­ent place and a dif­fer­ent cli­mate, a dif­fer­ent soil makeup. ”

To sup­port his argu­ment, he points to the fledg­ling Florida wine indus­try, which has come up with their own inno­v­a­tive way to get their vines to become dor­mant.

“When you look at some of these winer­ies that are grow­ing great grapes, they have to have the 60 to 80 day freez­ing period to become dor­mant and you don’t get that in Florida,” he said. ​“They come up with dif­fer­ent ways, such as inject­ing liq­uid CO2 into the ground and cre­at­ing dor­mancy that way, which makes sure those great grapes come out.”

However, get­ting the olives to grow is just half of the bat­tle. Making them eco­nom­i­cally viable for both the farm­ers and the state will prove to be much more chal­leng­ing. Nowhere is this bet­ter illus­trated than on the Florida Department of Agriculture’s web­site, which is dom­i­nated by cit­rus.

Painstakingly detailed reports each year show how many oranges, grape­fruits and tan­ger­ines are being grown, har­vested and sold. There are even tables show­ing exact quan­ti­ties of exports to more than a dozen dif­fer­ent coun­tries from at least five Floridian ports over the past decade.

The web­site does not con­tain nor does it link to any sta­tis­tics about olive grow­ing or pro­duc­tion.

“Right now we are still in the research stage in Florida,” Michael Garcia, pres­i­dent of the Florida Olive Council, told the Orlando Sentinel. ​“You can grow olives here, just not enough yet to be a big indus­try.”

Garcia did not respond to sev­eral requests for com­ment on this arti­cle but told the indus­try trade pub­li­ca­tion, My Farm Life, that the Florida Olive Council is exper­i­ment­ing both with tra­di­tional cul­ti­va­tion meth­ods as well as super-inten­sive farm­ing. He said that pre­lim­i­nary results are so far promis­ing, but it will take more time to see which method will work best going for­ward.

“We can make olive oil,” Garcia said. ​“It’s just a ques­tion of under­stand­ing whether it’s going to be small farms with high-qual­ity olives or large-den­sity.”

Olive oil pro­duc­ers in south and cen­tral Florida usu­ally pro­duce about a few hun­dred gal­lons of oil each year, which is mostly sold directly to con­sumers. Garcia told the Palm Beach Post that the state’s pro­duc­ers would have to wait and see how quickly this mod­est total could grow into some­thing larger.

“We have to see if it works,” he said. ​“We do not know year-over-year if you can get olives to bloom and set fruit in suf­fi­cient quan­ti­ties to be able to make money on it. If you make olive oil, you can sell it, there’s no prob­lem. The ques­tion is, can you make enough to make a profit at it?”

Keogh echoes this con­cern. He said that many farm­ers in Lake County have given up on farm­ing and sold their land for devel­op­ment. An alter­na­tive that they did not nec­es­sar­ily like, but saw as most eco­nom­i­cally viable.

“The eco­nomic via­bil­ity is, of course, another ques­tions,” he said. ​“A lot of these orange grove own­ers have lost a lot of their groves to dis­ease and are find­ing that maybe sell­ing the land for hous­ing or apart­ments is more eco­nomic for them.”

“But I tell you,” he added. ​“We can’t sup­port a state full fo asphalt and con­crete, we need to pre­serve some of these beau­ti­ful sugar sand hills that are out here.”

Richard Williams runs Florida Olive Systems, which pro­vides cut­tings for and advises numer­ous olive grow­ers around the state, includ­ing Keogh. Williams said that olive grow­ers and trade groups should apply some of the inno­va­tion they use for grow­ing olives into find­ing new prod­ucts for which to use olives.

“That being, we may ulti­mately not be able to pro­duce the nec­es­sary poundage of fruit per acre to be a viable com­mer­cial com­mod­ity extra vir­gin olive oil loca­tion, but from a poten­tial med­i­c­i­nal aspect and what ulti­mately can be extracted from var­i­ous parts of the tree, we might be a very strong grow­ing loca­tion.” 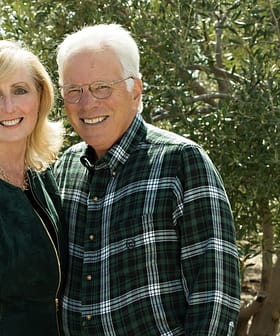 The latest Ministry of Agriculture update outlines a worsening scenario for farmers in Portugal and nearby Spain.

From irrigating at night to covering developed fruit in kaolin clay, one Croatian producer is adapting to the country’s increasingly hot and dry summers.