The olive har­vest­ing sea­son is under­way in the Gaza Strip, a coastal Palestinian enclave, with author­i­ties expect­ing a four-fold increase in olive yields.

There is a sur­plus… which would pave the way for farm­ers and traders to sell their olive oil out­side the Gaza Strip.- Nasr Abu Odeh, owner of Gaza’s largest mill

“This olive sea­son is the best in recent years due to the abun­dance of pro­duc­tion and the expan­sion of the cul­ti­vated areas,” he said. ​“This sea­son is being used to mark the impor­tance of the olive tree, what it rep­re­sents to Palestinians and their his­tory.”

According to the International Olive Council (IOC) fig­ures, Palestine, which includes the West Bank and Gaza Strip, pro­duced approx­i­mately 27,000 tons of olive oil in the 2021/22 crop year and 14,500 tons the year before.

“Farmers and landown­ers will be able to pick about one ton of olives from each hectare [of olive groves],” Adham al-Bassiouni, a min­istry spokesman, told The New Arab. ​“They will have the chance to make up for the losses they incurred in the pre­vi­ous years because of the coro­n­avirus crises and cli­mate change.

Olive oil and table olive pro­duc­tion are very impor­tant to the local econ­omy, and farm­ers hope to export both prod­ucts to sev­eral Arab mar­kets due to the bumper har­vest.

“There is a sur­plus… which would pave the way for farm­ers and traders to sell their olive oil out­side the Gaza Strip,” Nasr Abu Odeh, owner of the largest olive oil mill in Gaza, told the Palestine Chronicle.

Fawwaz al-Kafarna, an olive farmer in Beit Hanoun, told The New Arab that he had to hire 20 work­ers to har­vest his groves this year com­pared to the four he hired last year. ​“Such sea­sons are golden chances for thou­sands of work­ers to make some money,” he said.

Despite high expec­ta­tions for the cur­rent har­vest, ten­sions between Gaza and Israel, which erupted in August and resulted in more than 400 Palestinian casu­al­ties, are among the most sig­nif­i­cant chal­lenges that grow­ers face.

Local reports indi­cated that some farm­ers had dif­fi­cul­ties reach­ing their trees to begin har­vest­ing after Israeli sol­diers report­edly closed sec­tions of the Gaza Strip ahead of the Jewish hol­i­days. 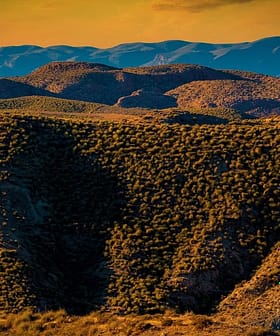 The local agricultural association said not every part of the province was impacted the same, with harvest decreases ranging from 30 to 70 percent.