BERKELEY, Calif. — Call it the EVOO evo­lu­tion. Extra-vir­gin olive oil, once the domain of Spain and Italy, is pop­ping up in sur­pris­ing new places.

It’s on the up-and-up Down Under, grow­ing in Croatia and is becom­ing such an indus­try in South America that a Chilean pro­ducer is bring­ing two prod­ucts to the U.S. mar­ket this year.

The boom is fueled by two devel­op­ments, a grow­ing appre­ci­a­tion of extra-vir­gin olive oil as a health­ier fat and tech­no­log­i­cal advances that have made it more cost-effec­tive to har­vest, says Curtis Cord, exec­u­tive edi­tor of the Olive Oil Times.

Anywhere is right — there even are fledg­ling olive oil indus­tries in China and India.

But that may change. Chilean pro­ducer Olisur is mak­ing a seri­ous run at the U.S. mar­ket. The com­pany is export­ing two lines, O‑Live & Co., extra-vir­gin olive oil for every­day cook­ing, and Santiago Limited Edition and Santiago Premium, super-pre­mium prod­ucts intended for sauces, fin­ish­ing dishes, etc. The oils are expected to be avail­able in all major mar­kets by the end of July.

Olisur farms a 6,500-acre estate about 80 miles south of Santiago using the new, high-den­sity meth­ods that have been rev­o­lu­tion­iz­ing olive oil pro­duc­tion.

In the past, trees were grown in beau­ti­fully spaced groves wide enough that har­vesters could go in with nets and shake or pull the olives off. In high-den­sity grow­ing, trees are planted much closer and kept shorter. Olives are picked by a mechan­i­cal har­vester that rakes the fruit off the trees, a quicker method that requires less labor.

There still are peo­ple who swear by the tra­di­tional, hand-har­vest­ing method from older trees, notes Cord. But the advan­tage to high-den­sity har­vest­ing is that you can get the olives to the mill faster — within two hours at Olisur — while the olives are at their fresh­est. Olisur oil has an acid­ity level of .2 per­cent, well below the stan­dard of .8 required for extra-vir­gin clas­si­fi­ca­tion.

Until recently, the United States did­n’t reg­u­late olive oil claims, but that has changed with the U.S. Department of Agriculture adopt­ing new stan­dards. Extra-vir­gin olive oil must be cold-pressed, free of defects and with an acid­ity of no more than .8 grams per 100 grams.

“They’re really estate-grown prod­ucts. We own the trees. We har­vest the fruit. We press the fruit. We store the oil. We bot­tle the oil. Essentially, you’re get­ting a fully inte­grated sys­tem,” says Rosengarten. ​“As a result, the qual­ity is sig­nif­i­cantly bet­ter than the mass-pro­duced com­mer­cial oils we’re see­ing from other places.”

In Australia, the olive oil indus­try began about 100 years ago for a very prac­ti­cal rea­son, says Paul Miller, pres­i­dent of the Australian Olive Association. It takes a long time to get olive oil from the Mediterranean to Australia — even longer back then — and this isn’t a prod­uct that ben­e­fits from aging.

Production has grown in recent years, with about 35 per­cent of extra-vir­gin oil pro­duced going to exports, mainly to China, Italy and the United States.

A major pro­ducer is Cobram Estates, which is avail­able online and in some spe­cialty stores in the United States.

Australian olive oil is known for its fresh and fruity taste. The 2010 har­vest is pre­dicted to be about 4.8 mil­lion gal­lons. With tech­no­log­i­cal advances, Australia could dou­ble pro­duc­tion from exist­ing trees and grow to pro­duc­ing about 1 per­cent of the world’s olive oil, says Miller.

So much for facts and fig­ures, what about taste?

Susan Spungen, a for­mer food edi­tor at Martha Stewart Living mag­a­zine and food styl­ist who worked on the movie ​“Julie and Julia,” got a first­hand look at the Olisur farm­ing meth­ods as one of a group of food pro­fes­sion­als invited to observe the recent har­vest.

She was impressed by the speed with which olives were turned into oil, and the taste.

“We did a blind tast­ing and we had no idea what we were tast­ing. I and every­one else in the room said that our favorite oil was the one from the com­pany that was giv­ing us the tast­ing. You can’t really rig that.”

“The dif­fer­ence in our olive oil is it’s fresh,” he says. ​“We con­trol the process; we’re con­stantly deliv­er­ing fresh olive oil to the mar­ket.” 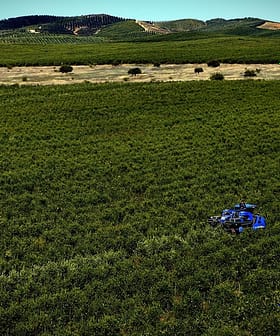