The increas­ingly-pro­nounced effects of cli­mate change are hav­ing a neg­a­tive impact on Croatian olive grow­ing, accord­ing to researchers at the University of Zagreb.

We have not yet reached the point of no return, but agree­ments are needed as soon as pos­si­ble.- Julije Domac, cli­mate and energy advi­sor to Croatian pres­i­dent

She added that at least three heat waves this sum­mer affected the country’s long-term drought and exac­er­bated a large num­ber of wild­fires.

Olive groves in Istria and Dalmatia, the coun­try’s two most sig­nif­i­cant olive-grow­ing regions, were among the areas burned this year.

In addi­tion to drought and fires, there is even greater con­cern regard­ing ris­ing sea lev­els in the Adriatic. According to exist­ing mod­els, the Adriatic could rise from 32 to 65 cen­time­ters by the end of the cen­tury.

“We have not yet reached the point of no return, but agree­ments are needed as soon as pos­si­ble,” said Julije Domac, a cli­mate and energy adviser to Croatia’s pres­i­dent.

He added that sig­nif­i­cant chal­lenges await global lead­ers at COP27 in Egypt as they seek to mit­i­gate the impacts of cli­mate change and limit the rise in global tem­per­a­tures to 1.5 ºC com­pared to the pre-Industrial aver­age.

If the sea level rises by a half-meter, Croatia will lose more than 100 mil­lion square meters of coast­line. More than a dozen cities and urban areas on Croatia’s coastal islands and the main­land, includ­ing Split, the coun­try’s sec­ond-largest city, would also be at risk.

Along with islands and coastal cities, impor­tant agri­cul­tural areas on the coast would also be at risk, includ­ing the Neretva River Valley and Ravni Kotari plain, which are home to many olive groves.

Officials warned the dam­age to olive oil pro­duc­tion would be immea­sur­able. Moreover, they added the loss of olive trees might fur­ther exac­er­bate the issue, as the trees are known to be sig­nif­i­cant car­bon sinks.

“Some stud­ies say that we are the third-most exposed European coun­try [to the impacts of cli­mate change],” Domac said. ​“Therefore, Croatia has to work hard, pri­mar­ily on adap­ta­tion to cli­mate change.”

Mirko Orlić, a geo­physi­cist at the Croatian Academy of Sciences and Arts, thinks this urgency must be on full dis­play from Croatian and global lead­ers in Egypt.

“Two things remain unde­fined,” he said. ​“The first is what each coun­try needs to do to reach the 1.5- to 2‑degree tar­get. The prob­lem is that it was never agreed to check whether the goals are being met. So there are promises, but there is no ver­i­fi­ca­tion mech­a­nism.” 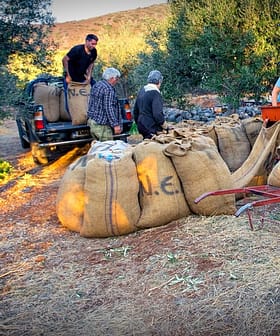 A modest yield is expected in most of the producing regions of the country, with many producers pinning their hopes on quality.

Deforestation in the Amazon increased 21 percent from 2020 to 2021 and is more than double what it was a decade ago.

Dafne and Mario Ružić didn't set out to win the olive oil industry's most coveted quality award, but hard work and their love for nature got them there.

People who follow World Health Organization dietary guidelines for the intake of fats, carbohydrates and sodium are responsible for fewer emissions.

The culturally and historically important role of steep-slope agriculture, including traditional olive groves, is threatened by increasingly arid climates and desertification.