The pro­longed drought and the sum­mer heat waves have taken a toll on olive pro­duc­tion in the Andalusian province of Almería.

Growers and pro­duc­ers in the province esti­mate that they will har­vest half the amount of olives as last year. The Andalusian regional gov­ern­ment antic­i­pates Almería to pro­duce 10,000 tons of olive oil this year, 31 per­cent below the five-year rolling aver­age.

However, the local chap­ter of the Association of Young Farmers and Ranchers (Asaja) said the pro­duc­tion decreases would not be uni­form across the province after it sur­veyed the most sig­nif­i­cant olive farm­ing areas.

“This is a fore­cast for those regions where [olive] col­lec­tion has already begun since there are still areas where the most activ­ity will occur dur­ing December and January, although dif­fer­ences accord­ing to areas and the cul­ti­va­tion sys­tem (rain­fed and irri­gated) are evi­dent,” Asaja Almería said.

While the chal­leng­ing weather has affected most groves, Asaja Almería said the rea­sons behind such low vol­umes vary from one olive grow­ing area to the next.

For exam­ple, water stress from Spain’s his­toric drought has affected yields in irri­gated groves. Still, in some areas, such as the Adnarax river val­ley, rain­fed and irri­gated groves received enough water.

Instead, Asaja Almería indi­cated that the pro­duc­tion decreases there are the result of other cli­matic phe­nom­ena.

Despite the sig­nif­i­cant decrease expected by pro­duc­ers across the province, Asaja Almería said the cur­rent har­vest would not be the worst one expe­ri­enced by the province since timely spring rain had helped many olive crops.

However, Adoración Blanque, the pres­i­dent of Asaja Almería, said grow­ers should not delay their har­vests, or they would risk los­ing qual­ity.

“It should be noted that, although the olive grove has main­tained the humid­ity fairly well, the extreme drought in recent months has caused the olive to ripen, so Asaja is warn­ing that delay­ing the har­vest too much could ruin the cam­paign,” he said. ​“It might not be safe to wait until January to pro­duce extra vir­gin olive oil.”

While olive and olive oil pro­duc­tion in Almería is rel­a­tively small com­pared to other Andalusian provinces, it still plays a vital role in the local econ­omy.

In the same period, the whole of Andalusia has expe­ri­enced a 31 per­cent growth in sales value, reach­ing €18.2 bil­lion.

Asaja Almería con­cluded its analy­sis with a note of opti­mism: rain in the com­ing months would vastly improve the end of the olive har­vest in December and January. 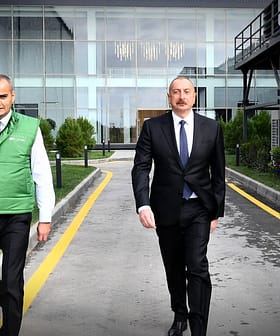 Fighting in the West Bank are crippling the harvest, while climate change is blamed for lower yields in the Gaza Strip.

New research into plants’ molecular response to mechanical stimulation sheds new light on their response to environmental stressors and development.

Some farmers in Pakistan are replacing traditional crops with olives, but need government subsidies to install irrigation systems and mill their fruits.