Farmers and pro­duc­ers in Andalusia, the world’s largest olive oil-pro­duc­ing region, expect a yield of 587,000 tons in the 2022/23 crop year, a 49-per­cent decrease com­pared to last year’s total and 47.5 per­cent below the rolling five-year aver­age.

According to the regional gov­ern­ment, which pub­lished its offi­cial pro­duc­tion esti­mate ear­lier this week, this will be the sec­ond worst har­vest since records began but will not reach the low of the 2012/13 crop year.

Officials in the region have blamed the pro­duc­tion decrease on a heat­wave in May and the extreme sum­mer drought.

“The yield will fall by 50 per­cent this year mainly because of the two or three days of high tem­per­a­tures we had dur­ing the flow­er­ing period in May,” Roberto García Ruiz, an agri­cul­tural researcher at the University of Jaén spe­cial­iz­ing in olive cul­ti­va­tion, told Olive Oil Times.

Temperatures exceeded 35 ºC in May and coin­cided with the blos­som­ing of the olive trees. In many groves, the extreme heat caused the flow­ers to fall from the trees and resulted in no fruit pro­duc­tion.

The endur­ing drought, which some researchers said was the worst the Iberian Penisula had seen in more than 1,000 years, resulted in trees that flow­ered before or after the heat­wave drop­ping or sac­ri­fic­ing their fruit to save water.

Overall, year-on-year pro­duc­tion fig­ures are down sig­nif­i­cantly in all eight of Andalusia’s provinces. However, pro­duc­tion in Huelva exceeded the rolling five-year aver­age by 5.7 per­cent.

Producers in Jaén, the most sig­nif­i­cant olive oil-pro­duc­ing province in Andalusia, expect to yield about 200,000 tons of olive oil, 60 per­cent below both last year’s total and the rolling five-year aver­age.

Significant declines in both olive oil and table olive pro­duc­tion have led to con­cerns of con­sid­er­able unem­ploy­ment and mil­lions of Euros of lost income for farm­ers and wages for pick­ers.

“We are fac­ing a shorter har­vest than nor­mal, which will seri­ously affect employ­ment,” Crespo said. ​“Fewer days means less income for field work­ers.”

The Jaén chap­ter of Cooperativas Agro-ali­men­ta­rias, Spain’s lead­ing agri­cul­tural coop­er­a­tive, pre­vi­ously esti­mated that the province would lose up to €1 bil­lion as a result of the poor har­vest. 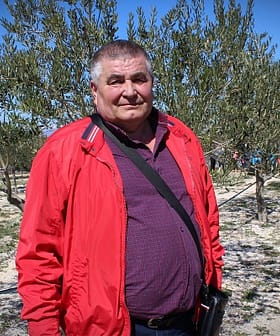 Producers began 2022 with optimism for another excellent harvest, but rain and disease resulted in some producers yielding no oil at all.