Dafne and Mario Ružić didn't set out to win the olive oil industry's most coveted quality award, but hard work and their love for nature got them there.
By Nedjeljko Jusup

Love is not a mir­a­cle, but it works won­ders. This can be said about the suc­cess achieved by the fam­ily farm OPG Lucio from the Croatian island of Solta in Dalmatia.

The feel­ing is inde­scrib­able. We are par­tic­i­pat­ing for the first time and then two awards. We are immensely happy and grate­ful to the olive trees that give us back our hard work and love. - Dafne Ružić, OPG Lucio

“We are not pro­fes­sion­als, olive grow­ing is our hobby and love,” said Dafne Ružić. She and her hus­band Mario (54) do not hide their sat­is­fac­tion that their two oils, the mono­va­ri­etal Lucio Šoltanka and the Lucio Oblica and Šoltanka blend, won the first two Gold Awards for Croatia in the NYIOOC World Olive Oil Competition in New York as results con­tinue to unfold.

“The feel­ing is inde­scrib­able,” Dafne Ružić told Olive Oil Times. ​“We are par­tic­i­pat­ing for the first time and then two awards. We are immensely happy and grate­ful to the olive trees that give us back our hard work and love. ”

The life story of Dafne and Mario is inter­est­ing and inspir­ing. They were born and live in Split, the largest city in Dalmatia and the sec­ond largest in Croatia, right next to the cap­i­tal Zagreb. Behind them are suc­cess­ful careers. Mario sailed all over the world on cruises and lived in New York for a while. He is a suc­cess­ful entre­pre­neur. And Dafne is a ten­nis cham­pion and coach. She was a mem­ber of the national team and cham­pion of the for­mer state of Yugoslavia in the pio­neer, junior and senior cat­e­gories.

“I did­n’t win Wimbledon like Goran Ivanisevic, but he did­n’t win the NYIOOC either,” laughs Dafne.

After a suc­cess­ful play­ing career, she founded a ten­nis school in Berlin, Germany, and is now engaged in pro­fes­sional stud­ies at the University of Split. She did not give up ten­nis, her first voca­tion and love. Just these days she plans to go to New York where she trains the chil­dren of American fam­i­lies.
​“They’re in love with our olive oil,” Dafne says with a char­ac­ter­is­tic smile.

About 20 years ago, she fell in love with Mario. Mutual love grew into a mar­riage and they had a son Noah (18), today a tall young man and an excel­lent stu­dent in Split. Little by lit­tle, the fam­ily began to return to its roots, and 15 years ago Mario decided to restore his grand­fa­ther’s farm on Šolta. The prop­erty is located near Grohote.

The island of Solta is oth­er­wise known for its top-qual­ity olive oil and untouched nature, as well as a par­tic­u­larly large num­ber of med­i­c­i­nal herbs.

“When we first came, we found a neglected prop­erty. It was over­grown with thorns and bushes, but we imme­di­ately knew that the place was spe­cial” Ružić recalls. After months of clean­ing, the beau­ti­ful olive trees planted by Mario’s great-grand­fa­ther Lucio emerged.

On the neigh­bor­ing plot, they met Josip Bilankov (Bepa), their future best friend and men­tor. ​“He knew every­thing about olives. Learning from him, we devel­oped a great love for these won­der­ful and beau­ti­ful trees,” Dafne and Mario said. Unfortunately, Bepo died five years ago with­out receiv­ing the awards they won. He would cer­tainly be proud of the suc­cess of his stu­dents.

As time passes for the Ružićs, the real­iza­tion is grow­ing that the trees that have been there for about 100 years should remain for a long time after them for future gen­er­a­tions. In the desire to spend their free time more often in nature and in con­tact with the land, they bought more, so today the prop­erty extends to 10,000 square meters.

Along with the restora­tion of about 80 old ones, they planted a dozen new olive trees — mostly of the Oblica and Levantinka vari­eties, with occa­sional Lastovka and Mastrinka.

“Today, our friends and tourists enjoy the ambi­ence, and are espe­cially look­ing for­ward to the olive oil from the estate,” Dafne noted. She and Mario know that oleo­tourism is strongly devel­op­ing in neigh­bor­ing Italy, that olive oil and olive groves are becom­ing pop­u­lar tourist attrac­tions. This is a good sign­post for Croatian olive grow­ers to pro­vide an addi­tional source of income in their own olive groves.

Olives require care and atten­tion through­out the year. That is why Ružići uses every free time to go to the estate. He is also helped by his son Noah, who is slowly gain­ing the nec­es­sary knowl­edge for a future olive grower.

They have just fin­ished prun­ing, and they will do all the other agro-tech­ni­cal works on time in order to achieve a good har­vest and qual­ity fruit this year as well.

They are also sup­ported by an almost ideal micro-loca­tion. The prop­erty is 50 to 100 meters above sea level. ​“There is always wind here, the area is per­fect. Limestone with lit­tle fer­tile soil rich in min­er­als and a cli­mate with hot and dry sum­mers and med­i­c­i­nal herbs suit the olives and give Solta oil.” 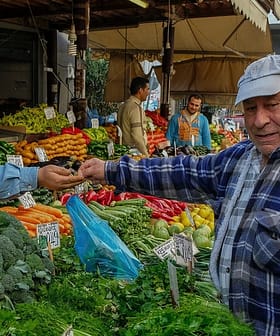 After Croatian independence in the 1990s, the land on which the farmers harvest the wild Lun olives was nationalized. Now 85 families are organizing to lease it back.