Extra virgin olive oil from Solta was approved by the EU, joining the other Croatian PDOs: Korcula, Krk and Cres.

Croatia’s appli­ca­tion to reg­is­ter the name ​“Soltansko masli­novo ulje” (Solta olive oil) has been approved and entered into the reg­is­ter of EU prod­ucts with a Protected Designation of Origin (PDO). This news was offi­cially announced in the EU’s Official Journal on October 21, 2016.

Solta is an Adriatic island located in the cen­tral Dalmatian arch­i­pel­ago which has a cli­mate of mild win­ters and hot, dry sum­mers. The olive oil here is pro­duced with two indige­nous olive vari­eties: Levantinka (also known as Soltanka) and Oblica, mak­ing up more than 95 per­cent of olive groves on the island – with Levantinka mak­ing up a slightly higher per­cent­age (50 to 60 per­cent).

Traditional meth­ods are used to main­tain the olive trees and har­vest their olives. The fruit is picked by hand or by using small hand rakes to rake the olives onto the ground which is cov­ered with nets. Solta olive oil is said to have a fruity aroma, with a touch of banana, and a slight bit­ter­ness and sharp­ness.

In order to meet PDO require­ments, all stages of the pro­duc­tion, from cul­ti­va­tion, har­vest­ing, pro­cess­ing, bot­tling and pack­ag­ing must take place on the island of Solta, and its seven islets which include Polebrnjak, Saskinja, Balkun, Kamik, Sarac, Grmej and Stipanska.

PDO is the high­est of the three des­ig­na­tions under the EU prod­uct cer­ti­fi­ca­tion sys­tem for agri­cul­tural prod­ucts and food­stuffs. A prod­uct with a PDO des­ig­na­tion is one which is pro­duced, processed and pre­pared in a cer­tain geo­graph­i­cal area.

The other two des­ig­na­tions include PGI (Protected Geographical Indication) for prod­ucts or food­stuffs with at least one stage of pro­duc­tion, pro­cess­ing or prepa­ra­tion tak­ing place in a cer­tain geo­graph­i­cal area; and TSG (Traditional Speciality Guaranteed) for prod­ucts with a ​“tra­di­tional char­ac­ter” when it comes to either its com­po­si­tion or pro­duc­tion.

Along with the islands of Korcula, Krk and Cres, this brings the total num­ber of Croatian olive oils to receive PDO sta­tus at the EU level to four. An appli­ca­tion from the penin­sula of Istria is still await­ing approval. 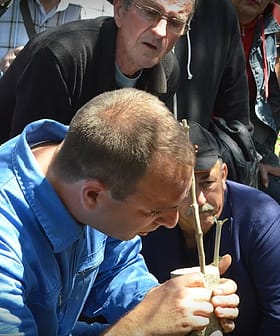