Several major Australian supermarkets including the popular chain Aldi, have come under fire after it was found that they were padding their oregano products with olive leaves.

International dis­count super­mar­ket chain Aldi — as well as IGA, Coles, Woolworths and many other inde­pen­dent stores across Australia — have recently come under fire from the Australian Competition and Consumer Commission (ACCC) after stan­dard test­ing revealed that two of their pop­u­lar stocked oregano prod­ucts (Stonemill and Menora brands) con­tained a large per­cent­age of olive leaves instead of the actual herb on the label.

This comes after the Australian con­sumer group CHOICE’s dis­cov­ery that only five out of twelve pop­u­lar brands of dried oregano prod­ucts being sold in Australia con­tained pure oregano. The ACCC inves­ti­ga­tion was insti­gated after a for­mal com­plaint by CHOICE ear­lier this year.

While only sin­gle sam­ples of each prod­uct where taken, the results were still indica­tive of a poten­tial breach of Australian Consumer Law as a delib­er­ate attempt to deceive con­sumers as the pack­ag­ing of these prod­ucts had a ​‘100 per­cent oregano’ claim. Aldi said that sup­ply chain issues are to blame and that they were just as sur­prised as con­sumers with the test results.

While Aldi has not the worst offender iden­ti­fied it was sin­gled out by the ACCC due to its promi­nence and reach in the mar­ket.

The chain has now agreed to sub­mit to reg­u­lar test­ing of its oregano prod­ucts and is offer­ing con­sumers refunds on all com­pro­mised prod­ucts pur­chased within a cer­tain time period.

It is esti­mated that close to 200,000 units were sold to cus­tomers dur­ing a year-long period. The brand has also promised to pur­sue ​“admin­is­trate solu­tions” with sup­pli­ers of their oregano prod­ucts to pre­vent this prob­lem hap­pen­ing again.

Aldi is cur­rently the third-largest super­mar­ket chain in Australia and is said to be rapidly gain­ing on its com­peti­tors using a low price strat­egy to lure cus­tomers from other chains. It has yet to be seen whether these rev­e­la­tions will have an impact on con­sumer con­fi­dence or dampen the brand’s plan to expand from its 400 stores into other loca­tions in South and Western Australia.

While there is no expla­na­tion yet for how the olive leaves found their way into the oregano prod­ucts, it is thought that the leaves where cho­sen due to their bit­ter taste and low price and the fact that when chopped finely it resem­bles oregano herbs.

Olive leaves are more fre­quently used as key ingre­di­ent in tea, where its liq­uid is extracted to form a solu­tion that has been used in tra­di­tional Mediterranean and Middle Eastern mar­kets for cen­turies. It is also pow­dered and bot­tled in pill form for its alleged anti-oxi­dant and immune boost­ing prop­er­ties. 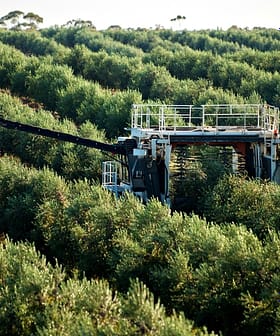 Salvatore Tarascio started growing olives in Australia in 2015, 85 years after his grandfather first cultivated them in Sicily. Now he is one of the country’s top producers.

Temperatures in northeastern Australia are 5 ºC higher than the average monthly highs.