The period from the mid­dle of October until mid-November is when the olive har­vest begins in Istria, Croatia’s pre­mier olive oil pro­duc­ing region.

This is also the time of year when an annual fes­ti­val cel­e­brat­ing the new olive oil sea­son is held in Vodnjan, in the south­ern part of the Istrian penin­sula. This year’s fes­ti­val is the 11th edi­tion of ​“New Olive Oil Days” (Dani mladog masli­novog ulja), being held from November 13 to 15, 2015.

Though olive oil has been pro­duced in Istria since Roman times, it is only in the past 20 years that it has devel­oped in a sig­nif­i­cant way, with the num­ber of olive trees grow­ing in the region’s rich red soil tripling dur­ing this time.

The city of Vodnjan has become a cen­ter for olive oil in Istria, and many qual­ity local pro­duc­ers and oil mills are located here and in the sur­round­ing area. It seems apt that the city is also the annual host of this fes­ti­val which brings together olive oil pro­duc­ers from across the penin­sula.

During this year’s edi­tion of this three-day event, vis­i­tors can par­tic­i­pate in free olive oil tast­ings, meet pro­duc­ers from across the region, and attend talks on top­ics related to olive oil pro­duc­tion. Like the past two edi­tions, local celebrity chef and choco­latier Robert Perić will be pre­sent­ing demon­stra­tions on how to cook with olive oil.

Visitors can also attend work­shops on bak­ing with olive oil, and a series of edu­ca­tional pro­grams will share new devel­op­ments on olive pro­duc­tion in Istria, as well as prac­ti­cal advice on how to store olive oil, its health ben­e­fits, and uses. Special events and work­shops for chil­dren, a city tour via a mini-tourist train, and nightly con­certs will round off a var­ied pro­gram of events for all age groups. 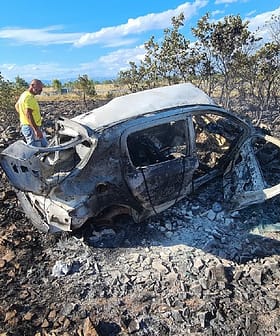 The fire burned 657 olive trees on the Dolina Maslina Estate. Fortunately, there were no fatalities but the driver was hospitalized.