Star Chef Recalls the Humble Cretan Tastes of his Childhood

Twenty liters of olive oil a day may seem too much for the aver­age cook, but for Cretan-born Yiannis Tsivourakis it’s the usual quan­tity of oil he uses daily in his kitchen. You could say he has a spe­cial affin­ity for the ingre­di­ent.

The exec­u­tive chef at the five-star Minoa Hotel located in Chania on the island of Crete, Tsivourakis couldn’t do his culi­nary magic with­out the golden liq­uid. And it is thanks to his per­sis­tence, that Mediterranean-style menus fea­ture at all four of the hotel’s restau­rants, with spe­cial nights ded­i­cated to gen­uine Cretan cui­sine. 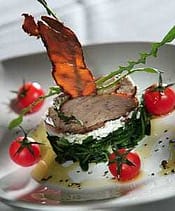 Born and raised in a moun­tain­ous vil­lage on Crete, Tsivourakis grew up on the local diet. As he became older, he became very involved in the process of pro­duc­ing and prepar­ing the food he ate. While most boys in rural Crete spent their days help­ing out with field­work, Yiannis spent his time in the kitchen, mak­ing cheese, fen­nel pies and olive oil cake. Encouraged by a teacher who saw his tal­ent, Tsivourakis decided to study cook­ing and thus began his jour­ney as a pro­fes­sional chef.

Tsivourakis is one of the few chefs who uses olive oil almost exclu­sively as the main ingre­di­ent for all his culi­nary cre­ations. ​“Olive oil for me is pre­cious but also an easy ingre­di­ent in the kitchen,” he explains.

Despite hav­ing worked with inter­na­tion­ally acclaimed chefs, his food still reflects the hum­ble Cretan tastes of his child­hood. Not only because he was born there, but due to what he describes as an ​“inner oblig­a­tion” to pro­mote the prod­ucts ofhis home­land. ​“When I first inter­acted with chefs from other parts of the world, I felt infe­rior, espe­cially when I saw pro­fes­sion­als from other coun­tries using and pro­mot­ing their local prod­ucts,” Tsivourakis admits. ​“Not only are there very few Greek prod­ucts known inter­na­tion­ally, they are not known in Greece either,” says Tsivourakis, who believes that pro­mot­ing and adver­tis­ing these under­val­ued prod­ucts would ben­e­fit both Greek cui­sine and the local econ­omy.

For him these hum­ble and under­es­ti­mated ingre­di­ents are what he loves most about Cretan cui­sine. Second on his list of favorite ingre­di­ents, after olive oil, are horta, wild greens avail­able freely through­out the Greek coun­try­side. ​“One can find a wide vari­ety of wild greens here in Crete, each hav­ing their own dis­tinc­tive aroma and taste,” he says. ​“We use them in a vari­ety of dishes such as pies, with seafood, accom­pa­ny­ing meat or we eat them with olive oil, fresh tomato and cheese.”

As for the olive oil, it is the basis for almost every sin­gle dish he pre­pares, and luck­ily there is no short­age of it on Crete, or in Greece over­all. ​“Everyone on Crete has their own olive trees, and the olive oil we use at the hotel is pro­vided by the owner from his own olive orchards,” he explains.

But don’t expect any eccen­tric dishes coated in olive oil. ​“I don’t use olive oil just for the sake of using it,” he is quick to point out. The extra vir­gin olive oil is used in gen­er­ous amounts but only in dishes that call for it. Vinaigrettes, sauces and even fry­ing is done with olive oil. Tsivourakis con­sid­ers olive oil to be a light ingre­di­ent and this is expressed in the nuances of his cook­ing. ​“Customers always tell me they’ve enjoyed a truly light meal, and that they don’t leave the table feel­ing stuffed. This I attribute to the olive oil,” he says.

Insisting on local Cretan cui­sine is not nec­es­sar­ily an easy task, and Tsivourakis has had his share of obsta­cles along the way, iron­i­cally not from tourists but from locals. ​“When I pre­pare dishes that are based on veg­eta­bles such as wild greens and legumes, many of the locals may be offended by the sim­ple and hum­ble ingre­di­ents that I use,” Tsivourakis says, express­ing his dis­may. His ​“mis­sion” has not only been to intro­duce Cretan cui­sine to for­eign­ers who visit Greece, but to also re-intro­duce the culi­nary delights of Crete to the locals.

Most Cretans, he reveals, are not aware of the value of their local diet, and do not fol­low it. ​“We have aban­doned our diet for many rea­sons: less time, less inter­est in fam­ily life, more money. We tried to ​‘Europeanize’ our­selves too quickly, and as a result we adopted new nutri­tional habits with­out know­ing the value of the nutri­tional habits handed down to us,” he says.

Tsivourakis believes that chang­ing this men­tal­ity can only start at home. ​“Parents need to cook at home and start using the ingre­di­ents that make up the Cretan diet for it to become a way of life once again,” he says.

Although he is sad­dened by the over­abun­dance and acces­si­bil­ity of fast and easy food, Tsivourakis does a see a re-emer­gence of the tra­di­tional Greek diet. The recent eco­nomic tur­moil has dri­ven the Greeks back to their hum­ble, afford­able and healthy cui­sine… or per­haps it is due to enlight­ened chefs like Tsivourakis, who are show­ing them what they’ve been miss­ing.

In Italy, a New Beer Made from Olive Leaves

Birra Olea is made from local olive leaves, which the brewer says lend a smokey flavor and antioxidants.