The debate over the pos­si­ble intro­duc­tion of a pan-European food label­ing sys­tem is ignit­ing, with the Czech Republic, Sweden, Greece and the United Kingdom becom­ing the lat­est coun­tries to come out and oppose the idea.

Whether or not Europe should adopt the French-born Nutri-Score FOPL (front-of-the-pack label), which was recently intro­duced in Germany and sev­eral other coun­tries, sits at the heart of the debate.

“This label­ing sys­tem might dis­crim­i­nate against qual­ity food, food which is already labeled for its qual­ity and food that has the prop­er­ties and the com­po­si­tion spec­i­fied by the law,” the Czech Ministry of Agriculture said in a state­ment. ​“And it does not take into account the daily con­sump­tion, which means that olive oil will not be clas­si­fied by Nutri-Score as a truly healthy food.”

The min­istry added that the Czech Republic would not adopt Nutri-Score on a nation­wide basis.

The well-known healthy qual­i­ties of olive oil are often cited by crit­ics of Nutri-Score as a rea­son not to adopt the FOPL sys­tem. Still, the International Olive Council (IOC) is work­ing with French author­i­ties to have olive oil marked as a high-qual­ity and healthy food by the FOPL.

According to the Spanish mag­a­zine Agrodiario, the IOC hopes to have extra vir­gin olive oil re-clas­si­fied with an ​“A” — the health­i­est grade in the five-let­ter sys­tem.

Jaime Lillo, the deputy direc­tor of the IOC, said the orga­ni­za­tion is work­ing with sev­eral experts in the health sec­tor on a con­sul­ta­tive com­mit­tee ​“to have olive oil be rec­og­nized, espe­cially extra vir­gin olive oil, as a rel­e­vant con­trib­u­tor to health.”

However, Serge Hercberg, a pro­fes­sor of nutri­tion at the University of Paris and head of the team that devised Nutri-Score, has pre­vi­ously refuted these claims and said the point of the FOPL is to com­pare the nutri­tional qual­i­ties of foods in the same cat­e­gory.

He main­tains that it is not meant to be the only fac­tor used by con­sumers in their pur­chase choices and, in a July 2020 inter­view with Olive Oil Times, said the algo­rithm used to cal­cu­late the scores was sci­en­tif­i­cally sound.

In Greece, where author­i­ties have already expressed their con­cern about the pos­si­bil­ity of Nutri-Score being adopted by the European Union, new crit­i­cal voices have been raised.

Manolis Hnaris, a mem­ber of the plan­ning com­mit­tee in the region of Crete, where he also serves as an offi­cial advi­sor of the pri­mary sec­tor, has writ­ten a pub­lic let­ter to the Greek Ministry of the Rural Development to empha­size the ​“great dan­ger” that would come as the result of the intro­duc­tion of Nutri-Score within the E.U.

Hnaris said the French FOPL is unable to offer a true nutri­tional pro­file of the food being labeled. According to the Candiadoc news agency, Hnaris believes that those prod­ucts with a high nutri­tional value and high in healthy fats, such as honey, are being clas­si­fied by Nutri-Score in the same cat­e­gory as ketchup and sodas.

Honey is one of the most rel­e­vant agri­cul­tural Cretan exports to con­ti­nen­tal Europe and Hnaris asked the export asso­ci­a­tion of Crete to join the action to sub­stan­tially mod­ify the Nutri-Score sys­tem or to halt its spread in its cur­rent form. Crete is also respon­si­ble for roughly one-third of Greek olive oil pro­duc­tion.

The Nutri-Score impact on exports is also the focus of the debate in Italy, where the farm­ers asso­ci­a­tion Coldiretti once again stressed how ​“harm­ful” the imple­men­ta­tion of Nutri-Score would be to Italian exports both inside and out­side of the E.U.

According to the asso­ci­a­tion, should Nutri-Score ​“expand to a global level, we would see an attack on Italian agri­cul­tural exports worth €44.6 bil­lion, which include prod­ucts such as olive oil, cheese and cold cuts that are unjustly penal­ized by the new label­ing sys­tem.”

Outside of the E.U., the adop­tion of a new FOPL has also been met with skep­ti­cism in the United Kingdom, accord­ing to the results of a recent con­sumer sur­vey from Which?.

In the sur­vey, most of the respon­dents said they favor the cur­rent UK food label­ing sys­tem and would be against the even­tual intro­duc­tion of a dif­fer­ent one.

Similar oppo­si­tion to a new FOPL is expected by local author­i­ties in Sweden, where a nation­wide food label­ing plat­form was intro­duced decades ago and, accord­ing to the local author­i­ties, has worked quite well. The Swedish Keyhole logo was also adopted in Denmark and Lithuania.

“In Sweden we see FOP nutri­tion label­ing as one of the many impor­tant pieces of the puz­zle when it comes to improved dietary habits and we greatly acknowl­edge the aim of the Farm to Fork Strategy to improve health in the E.U.,” said Veronika Öhrvik, project man­ager of Keyhole.

“Products have been devel­oped over the years accord­ing to the cri­te­ria for the logo,” she said. ​“We are con­cerned that if we can no longer use our logo, food pro­duc­ers in Sweden will not have any incen­tive to develop prod­ucts with whole grains.”

“If we have to start from scratch with another logo, we are afraid it might take many years until we are back at the same level of inte­gra­tion in the soci­ety [of the Keyhole logo],” Öhrvik added. ​“We believe more in regional labels with a com­mon ground.” 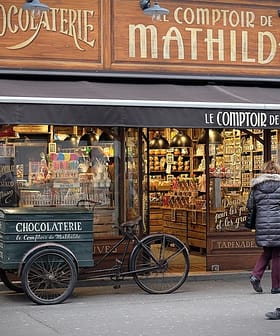 Health providers in France have asked the federal government to lobby the European Commission in support of the widespread adoption of the controversial front-of-pack label system.

Cheese producers protested against Europe’s mandatory adoption of Nutri-Score after an algorithm update resulted in lower scores for some cheeses.

The recommendation comes from a report outlining ways in which the European Union can increase its commitment to cancer prevention.