The Story of Golden Bless Olive Oil (So Far)

I was born in Canada to Greek immi­grants, and would spend my sum­mers in Greece with my par­ents. My olive oil story begins in Astros – a lit­tle sea­side vil­lage in the Peloponnese province of Greece. It is there where I first met my cousin, Theodoros Karras, who spoke no English and I could only speak a few words of Greek. Since then I have learned to speak Greek and he has learned to say two or three words in English.

Golden Bless extra vir­gin olive oil is life­long pas­sion of Theodoros. He grows tiny green olives called Manakia on the hill­sides of the fam­ily estate. They are picked and then cold pressed into unique light smooth but­tery oil. The acid­ity lev­els are super low and the nutri­tional value is high. The olive oil has no burn or bit­ter­ness as many of the other vari­eties have. My cousin’s dream was to bot­tle his olive oil and bring it to America.

More than likely his oil has made it to America in a bot­tle label of ​“prod­uct of Italy” as Italians would come and pur­chase all his and his neigh­bors oil. He claims that he was born under an olive tree and hopes to die there too.

10 years ago I retired and was spend­ing more time in Astros. Theodoros was con­stantly ask­ing me to help him to bring his oil to America. He had researched all sorts of facts and fig­ures on the North American mar­ket. I tried to avoid him but when he started show­ing up my hang­out — Jack’s Taverna, he took advan­tage of me at my weak­est moments, when I was drink­ing. He is so per­sis­tent I have now nick­named him Teddy Harass. He had come up with a name for his olive oil, Golden Bless.

I said I didn’t like the name and we hired a mar­ket­ing firm. It cost us 3,000 euros to be told Golden Bless was the per­fect name. The story behind the name is that in ancient times olive oil was ​“blessed” and Hypocrites called it liq­uid ​“gold.” After some seri­ous con­sid­er­a­tion (3 or 4 drinks) I came up with our cor­po­rate name ​“Golden Bless America.” I wanted God Bless America, but it was already taken. Labels were designed and printed, bot­tles and tins were filled and a con­tainer was loaded. The oil set sail to Canada.

The con­tainer finally arrived in Calgary in May, I opened the door and was imme­di­ately bap­tised by oil pour­ing out. We had the con­tainer loaded loose, boxes stacked up floor to ceil­ing with no pal­lets. About ¼ of the tins had tipped, bent, rup­tured and emp­tied. Oil was pour­ing out all over the park­ing lot of our ware­house. I felt like cry­ing, but I reas­sured myself that after all we had insur­ance. They were noti­fied and I was told to take lots of pic­tures and a marine sur­veyor would come to inspect. The con­tainer had to be emp­tied to avoid fur­ther envi­ron­men­tal dis­as­ter.

The con­tainer was unloaded, we were all drenched in olive oil. We spent 3 days sal­vage all we could. It took a week to clean the undam­aged tins that were cov­ered with oil. The marine sur­veyor after 6 days arrived and con­cluded that it was the fault of the bot­tler who had loaded the con­tainer improp­erly which meant insur­ance did not cover our loss. Recovering our losses with the bot­tler did not go well and now we are using a new bot­tler. Subsequent ship­ments have all been made using pal­lets.

The story of Golden Bless doesn’t end here, it actu­ally is just the begin­ning. Right now I have to load up the Goldenblessmobile and drive 700 kilo­me­ters from Calgary to Saskatoon to deliver 70 cases to our newest cus­tomer. I could ship them but feel that on as many deliv­er­ies as pos­si­ble espe­cially the first it means a lot to our cus­tomers to have that per­sonal touch, and besides I can pick up the cheque. I have trav­eled thou­sands of miles to seek out cus­tomers in Canada who can appre­ci­ate an amaz­ing olive oil at a bar­gain price. What I have learned in my trav­els is if I can get them to try it, they will buy it. 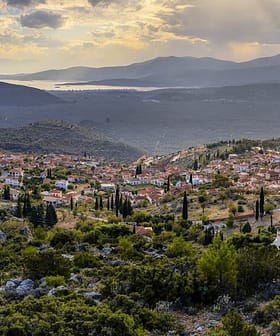 The Nippon Olive Company earned two Gold Awards at the 2022 NYIOOC, attributing the success to seven decades of experience and the Mediterranean climate.

In Slovenia, a Fruitful Harvest Despite Drought, Pests

The last few seasons in Slovenia have been characterized by high summer temperatures and a lack of precipitation. Salvation came with heavy September rains.