Researchers are currently studying the genetic traits of the newly-discovered autochthonous varieties to see how they cope with the area’s extreme weather.

Researchers from the Catalan Institute of Agrifood Research and Technology (IRTA) have iden­ti­fied 13 new local olive vari­eties in the autonomous com­mu­nity, which the orga­ni­za­tion will add to its olive germplasm bank.

The study, which IRTA con­ducted in col­lab­o­ra­tion with other agen­cies in the region, seeks to enhance and pro­mote tra­di­tional olive cul­ti­va­tion and oil pro­duc­tion in Pallars Jussà, the county where the olive vari­eties were dis­cov­ered.

(These olive vari­eties have) a very high pro­por­tion of oleic acid and a large num­ber of polyphe­nols, which give them a bit­ter taste and a promi­nent, bal­anced and aro­mat­i­cally rich spici­ness.- Antonia Ninot, researcher, IRTA

The genetic traits of these olive vari­eties are espe­cially inter­est­ing for the researchers because the olives grow and suc­cess­fully yield oil in one of Spain’s most extreme cli­mates.

Researchers involved in the study care­fully cat­a­loged dif­fer­ent phys­i­cal and chem­i­cal prop­er­ties of each of the trees and their olives, includ­ing describ­ing the shape of the trees, their fruits, leaves and pits.

The researchers also stud­ied the mol­e­c­u­lar com­po­si­tion of the olive vari­eties and the chem­i­cal and sen­sory trails of the oil.

According to Antonia Ninot, a researcher at IRTA’s fruit grow­ing pro­gram, the new vari­eties ​“have, in gen­eral, a very high pro­por­tion of oleic acid and a large num­ber of polyphe­nols, which give them a bit­ter taste and a promi­nent, bal­anced and aro­mat­i­cally rich spici­ness.”

“These qual­i­ties make them very inter­est­ing from the organolep­tic and health point of view,” she added.

Olive grow­ing in Pallarès Jussà has a long tra­di­tion, with both autochtho­nous and non-native vari­eties widely cul­ti­vated. Overall, the county is home to 733 hectares of olive groves that yield about 650 tons of olives annu­ally.

“It is a rel­a­tively small sec­tor where the major­ity of pro­duc­ers are farm­ers with arti­sanal pro­duc­tion and direct sales, and the activ­ity is not the main one,” the researchers wrote.

Currently, the Catalan olive sec­tor is dom­i­nated by the cul­ti­va­tion of four main vari­eties – Arbequina, Morruda, Empeltre and Sevillenca – with Arbequina mak­ing up roughly half of all olives grown in the autonomous com­mu­nity. All four vari­eties account for about 85 per­cent of total olive cul­ti­va­tion in the region. 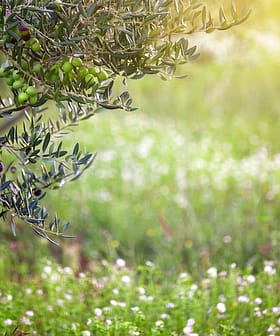 More than 750 Mediterranean olive farmers across four countries have applied to join the Olivares Vivos project, which succeeded in increasing biodiversity in Andalusian olive groves.

Rain is in the forecast for this week, but producers are still expecting what could be the third-lowest yield since records began.

Up to 27 Million in Spain Face Water Shortages by 2050, Minister Warns

The southeast of Spain is at the highest risk. New investments in infrastructure and technology are critical to mitigating the impacts of the crisis.

The steep decline in olive production has decreased the amount of work for farm laborers in Spain and forced the government to expand its safety net.